The Head of the Ministry of Emergency Situations Evgeniy Zinichev: A high alert mode has been introduced. Nobody can relax now. 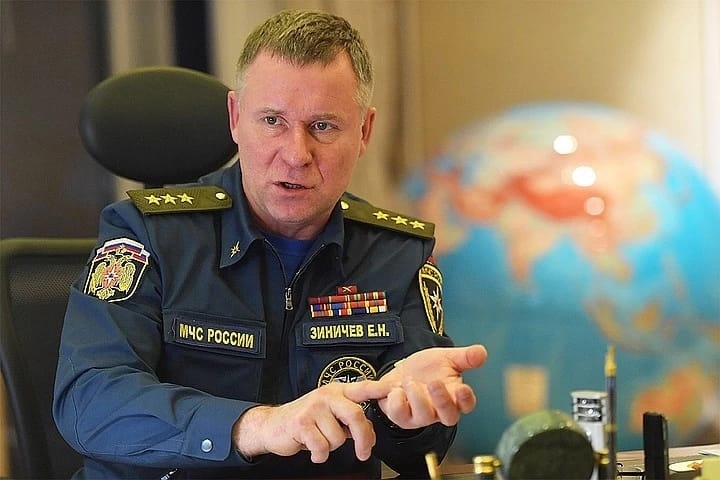 The Head of the Emergency Department told Alexander Gamov, a columnist for Komsomolskaya Pravda, about this and many other things.

-...Evgeniy Nikolaevich, I understand that this is a rhetorical question, but the situation associated with the pandemic is a real emergency.

- More than. This Tuesday, April 14, President Vladimir V. Putin didn’t just said (at an online meeting of the Supreme Eurasian Economic Council, which was dedicated to the pandemic) that extraordinary measures must be taken to stop the spread of the coronavirus.

- But you are also involved in the "rescue of the country". Now it is already called: the line of defense against the coronavirus.

- But we are not used to advertise our work very much.

- But it is already known that two planes of the Ministry of Emergency Situations have arrived in Murmansk. Such a powerful landing force...

- Yes, the local administration of the Murmansk Region has applied to the Federal Operational Headquarters for preventing the spread of coronavirus infection in the Russian Federation, and we have sent our group and equipment to this region to deploy an airmobile hospital and temporary accommodation, as well as to conduct sanitary treatment of territories.

- Is it true that there are dozens of people infected with coronavirus?

- You should ask this question the doctors, the local authorities, but not us. I can only say that the Murmansk Region has a difficult epidemiological situation. And our group consists of specialists from the Noginsk and Nevsky rescue centers, the Centrospas Unit, as well as the personnel of the EMERCOM of Russia in the Murmansk Region. In total-about 130 people and 20 units of equipment.

I am sure that our help will not be superfluous for specialists of the Ministry of Health and the Federal Service for Surveillance on Consumer Rights Protection and Human Wellbeing (Rospotrebnadzor).

- Could you tell us: how does the Ministry of Emergency Situations operate in other regions? You are asked for help from other regions.

- Yes, regularly. Mostly, the appeals are related to assistance in sanitation of social facilities and transport infrastructure.

- Is it related to the pandemic?

- Of course. Since the beginning of April, divisions of the Russian Ministry of Emergency Situations carry out disinfection on a daily basis. More than 70 hospitals, clinics, and more than 80 educational institutions have already been processed, plus more than 20 social service facilities, as well as more than 2,600 transport infrastructure facilities and almost 900 kilometers of roads. This work will continue.

“If there is no a fire, there is a flood”

- As far as I understand, the direct responsibility of the Ministry of Emergency Situations is to protect the population and territories from natural and man-made emergencies.

- We are on high alert now, and not only in the reason of fighting the coronavirus, but also seasonal risks and the natural disaster.

- Do you have enough time?

- According to forecasts of meteorologists, at the moment the flood situation on the territory of most regions is favorable and the probability of flooding of settlements is low.

But we can't relax. The forces and means are ready. It is important for us that people can take measures to protect their property in advance, so special attention is paid to timely informing citizens and government authorities about the current situation, possible risks, evacuation rules and temporary accommodation points that have already been prepared.

"About floods. In 44 regions of Russia, the active phase has already ended, but in 13 - on rivers, there is still ice. On the territory of the Far East, in the Volga District, in Siberia and in the Urals, 18 homestead plots, 23 low-water bridges and 6 sections of roads remain submerged."

- What about the fires? Has the number been increased?

- Unfortunately, it has. And there are many reasons for this: it is a snowless winter, a high temperature, and the human factor. 99% of landscape fires are caused by humans. People burn dry grass. A special fire protection regime has been introduced on the territory of 52 subjects, more than a thousand municipalities. Alexander, I don't have much time. I will give you one document-read it and paste it into the text of our interview (see the fragment of the report below).

- I just remembered a meeting on the fires issue that I was able to attend in Chita, which was held by Vladimir Putin at the end of April 2019. Because of the counter fire of vegetation, all the Transbaikal District was on fire.

- You remember that correctly! So, since the beginning of 2020, the supervisory authorities of the Russian Emergencies Ministry have conducted almost 11 thousand interdepartmental raids and 26 thousand operational visits on reports of burning of dry vegetation. In the course of supervisory and preventive measures, more than 13 thousand cases of uncontrolled counter fire of dry vegetation were identified.

The situation with the use of aviation and space monitoring is being monitored. More than 450 temporary fire stations and more than 2,000 mobile maneuver groups have been set up to cover the most remote settlements. Operational-raid groups are equipped with unmanned aircraft, cross-country vehicles, and space monitoring equipment.

FROM THE REPORT TO THE MINISTER OF EMERGENCY SITUATIONS

- To establish the causes and identify the culprits of wildfires, the number of investigative bodies has been increased by almost 380 specialists. According to the facts of natural fires, investigators of the EMERCOM of Russia have currently initiated 59 criminal cases. More than 250 legal entities and almost 750 local government officials, as well as more than 7 thousand citizens have been brought to administrative responsibility for the violations committed.

- Not exactly. I am convinced that the time is coming when we must move from administrative penalties to the criminal code. This happens from year to year, we are introducing additional measures, but there are still few changes for the better, so we need to solve the issue by radical methods.

- I don't sit in my office. My work mode is another.

This time I did an interview with the Head of the Ministry of Emergency Situations by the phone, and I could not help asking him the following question:

- Comrade Colonel-General, is it true that you are currently control your own Department remotely?

- Alexander, the question is somewhat strange... I think you are well aware that I do not sit in my office on Vatutina street, even “in peacetime”. All the time on the road - "remote mode" is my constant work mode.

By the way, I have all the necessary means to communicate with my colleagues on the plane and in the car.

- I was in your office, and I've seen it all. In the plane and car, I haven’t been yet.

- As for the current situation in particular, over the past two weeks, I have met and communicated with a large number of people.

- Are you talking about the emergency in Orekhovo-Zuyevo?

- Including it. Yes, of course, I visited the place where the apartment building collapsed on April 4. And then I went to the school-a temporary housing facility for residents... There were at least 150 people there.

Therefore, in order not to risk the health of their inner circle, and this is all the management of the Ministry of Emergency Situations, I decided to switch to remote operation for some time following the advice of colleagues.

Since the beginning of April 2020, Evgeniy Zinichev visited the Rostov, Astrakhan, Omsk, Tyumen regions and the Republic of Khakassia, where he checked the preparedness of the forces and means of the Ministry of Emergency Situations for the fire and flood seasons. In parallel, about 10 meetings were held, and not only conference calls. All this made it possible to further intensify the work of the Emergency Department, which even on ordinary days operates with a high voltage.